After the lovely green sessions, you always expect the ugly red sessions to come. You can expect bad beats, but you don’t expect to play bad. You say to yourself: yeah they got lucky, yeah they played terrible, yeah I’m much better than they are and I should own the limit. But actually you play terrible! And that’s what I did this week end. A lot of bad calls and lots of pots played too aggressively. 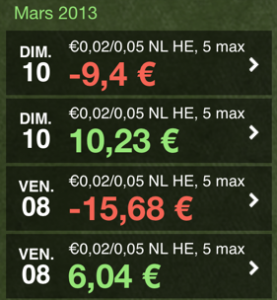 and we are back to square one!

Let’s continue with the traditional hand review. A rare spot here. I’m glad I haven’t lost my stack, but it is also tough to fold on the button’s raise. I just called because I felt I got trapped, but I was more in a raise or call state of mind, so I never considered to fold here. Would you fold after the button all-in raise?

Another defining moment of the week-end was when I won this allin with tens against kings. The flop came KTx, I let you imagine how it ended. It was beautiful…

So that’s it, there will be a session or two tonight, I’ll try to avoid the mistakes I made earlier and make good figure to show you some nice charts in the next post!