It’s already been two years since Poker Analytics has been released and we’ve been thrilled with the ride! We have got great response from the community so we would like to thank you again. And it was time to make some major improvements to your favorite app, so we’ve listened to everything you told us and decided to go for a new major release: Poker Analytics 3.0 codenamed “Bamboo”.

We would like to take some time to explain one of the biggest addition to this version: hand histories. With it, you can simply and quickly add any hand history during a session and share it.

And you can test it right now! Our beta is open  and we need your feedback. You can already register at http://tflig.ht/1hCrlzC.

Hand reviews are one of the key of winning at poker. Discussing about a hand with other players is  one of the most efficient way to improve. It’s even more powerful if you have the chance to discuss the hand with better players, that’s why we’ve added the sharing on your favorites social networks.

There is two way to add a new hand. You can record a hand directly from a session and get automatic setup of the table size and blinds. You can also add hands freely using the Hands tab.

The first part of the screen is the hand setup: table size, blinds, ante, stacks, and your hand.

Set up the hero position by tapping on a seat.

Then simply set the players actions, the app will automatically give the focus on the relevant action.

Set the cards at each streets and voilà, it’s done.

Then you can ask your friends their advices and improve!

Test it now! Register for Poker Analytics Bamboo 3.0 at http://tflig.ht/1hCrlzC

Let us introduce you our new app: Poker Analytics Regular. This app is a new affordable entry point to be able to track your poker results.

Between the lite version and the pro version, you will find inside enough features to let you track and follow your results, as nicely and seriously as the pro version.

However, if you feel you need more, like all the reports, complete statistics, coaching screens, etc. you will be able to buy, as in-app purchase, the features you need or directly upgrade to the pro version.

One more thing: we also decided to enable a donation system, if you feel we deserve it, we’ve added three special in-app purchase which let you donate toward your beloved developers.

Have fun at the tables.

The new version of Poker Analytics is now available on iTunes. This new version contains mainly a longtime request from our users: the multiple currency management.

This feature will let you have one main currency, which you can set in the “more” tab. Aside, each of your bankroll may have, if needed, a different currency.

Each of them will have a rate and this rate will be set either automatically using google rate service or manually by yourself.

The stats and reports will all be displayed using the main currency and the rate will be used to calculate the numbers from your “foreign” bankrolls.

After some thought, we decide to make this feature as a in-app purchase. This is our first step into this new way of financing our day to day work.

That’s why we also decide to create a new stand-alone version of poker analytics, cheaper but with fewer features. All the “pro” features will be available as in-app purchases. More on that in the next blog post.

Have fun at the tables.

This will be the final post of the challenge.

I’ve made just a few sessions since the last post and I’ve ended the challenge on Saturday. I’ve decided to mix four tables of NL5 with 2 tables of NL10 to try to speed things a bit. Actually things went ok on the NL10 tables but not so good at NL5. I’ve lost a bit at the end of the day, so here is the final screenshot of my bankroll:

It feels ok to look at this number, but when you look at the stats, it gets really lousy: 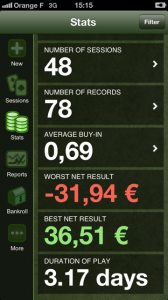 Yes I’ve played a lot, but let’s not forget that we have a huge 6.5% rake here in France. I’ve actually raked more than 325€ during the challenge. If we do the math I’ve cashed approximately one twelfth of my total earnings…but hey it’s good to make people work at Winamax, and some other for the ARJEL, isn’t it? Actually can someone build some kind of decentralized poker platform without rake please? 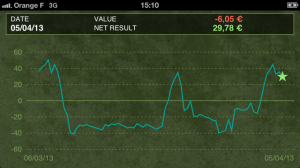 What can we see here? We can discern a nice roller-coaster pattern, which is the the standard pattern for a pro like myself, so that’s a good sign…and what is also a good sign is that I’ve just reached the top of the mountain – it was really exhausting – and now I can finally start the next descent…

So that’s it for now guys, thanks for reading the challenge. Next post will probably be more Poker Analytics centric, but if you have any kind of wish about the app, please tell us!

See you on tables!

Sorry for not posting since a long time. I’ve been a week off, and I did play a bit, but the context wasn’t appropriate to write. So let’s summarize what happened. First of all, after the last post, things went south again badly. I don’t remember the key points of the losing streak, because I was probably playing awfully, and I didn’t write about it, but apparently I tried to, I just realized that I started a post named “Back into hell” with two sentences…

So it went bad, and then good again, and finally things are not very interesting because I am approximately at the same level as I was in my last post… 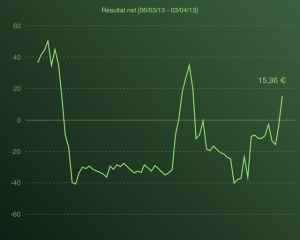 But it is important to notice that I went from +35 to -40, which is a great performance…And I think at that point when I hit the bottom, and that my back was against the wall, I finally realized I needed to adjust my game. I think that the main issue with my game was to try to win some pots at any costs, and when you fail again and again it doesn’t look good at all. Actually you can simply give up those spots without losing too much and wait for better ones.

I started my vacations approximately after hitting the low point of the chart. During that week I played on my laptop, so I played on 4 tables rather than my usual 6 because the screen is really small, and even 4 tables is not really comfortable…I decided to make a report on Poker Analytics to see what was the difference in terms of hour rates when playing a different number of tables. This is a feature I really love in the app, the ability to create reports using comparators. I just have to select the hour rate as a statistic I want to watch, the number of tables as a comparator, and here I have a report that I can analyze either in a table or in a chart: 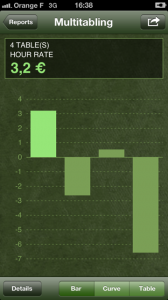 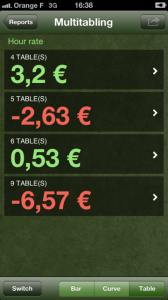 So 4 tables looks much better, and 9 are not that good. But at that point I am not sure if the volume of play is enough to make it a real statement.

There another thing I tried to apply recently, to avoid being on tilt, is the famous Ivey’s rule: stop after losing two buy-ins. It’s pretty simple and efficient, but it’s important to stick to it. I never really applied it, and I should have, because when I start losing I lose bad as we can already see in my net result chart. I applied the rule twice since I started to get back on tracks, and it’s probably a good thing.

That’s it for now, the challenge finishes at the end of the week. I probably won’t reach NL10 at that point, but I can say now that finishing above zero would be good anyway.